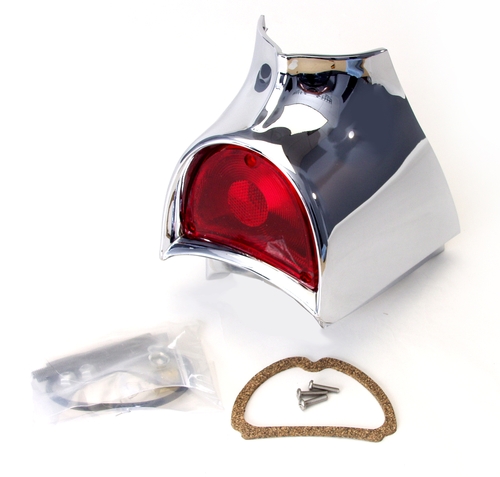 3. All of our die casting is done with the hot chamber method. The dies and the metal must both be raised to a certain temperature before, and each time, you cast a part. It is a slower process and requires excellent tooling. While it is more costly and slower, it yields a very consistent high quality part, which is strong and light. This is much like the factory did. The cold chamber process (used by some manufacturers) can utilize cheaper tooling and produces parts faster, but with a fairly high inconsistency and high reject rate. The parts also tend to be heavier; not normally a good thing with car parts!

Our diecast parts are manufactured, polished and plated in the U.S.A.

A Little About Us...

In 1955 Gene Smith bought a black 210 Del Ray. It was a 265 with a 3 speed overdrive and 4:11 gears. It was the first power-pak equipped car that Lew Williams Chevrolet of Hollywood, California, delivered. Which explains the 60 miles on the oddo when Gene picked it up that evening; everyone at the dealership wanted to drive it! Unbeknownst to everyone, including Gene, that was the start.

Gene worked for a body shop through high school and became, among other things, a painter. In 1969 and 70 Gene built a car in his backyard. That coral and grey '55 won Best Paint at a show back East. As a result, Gene was "commissioned" to build cars for customers. The first frame-off was done in his backyard in 1970. NOS parts were more available then, but still, Gene needed parts for customer cars, and that became the start of Gene Smith Quality Reproduction Parts and Accessories. Over a dozen frame-offs were done in that backyard, along with parts in the garage. Gold louvers and outside mirrors were the first products, followed by power-pak exhaust extensions.

A bigger garage was added in that backyard as the business grew. Later a bigger backyard as we grew, but still just a small company of enthusiasts making parts for enthusiasts.

Now we are located across the street from our chrome plater of 30 years; very handy! Still working to make the best parts to keep your TriFive on the road looking good.